They say that when we are thirsty, we need to drink lots of fluids, and Gatorade is often recommended for dehydration. You may even want to give some Gatorade to your dogs on hot days when they are really thirsty. But, can dogs drink Gatorade? And, if so, is Gatorade good for dogs?

Fortunately, Gatorade is not toxic to dogs, and it isn’t going to harm them at all as long as you don’t give them too much. Let’s review the reasons why people give Gatorade to their dogs, and why you should opt for other fluids when hydrating your pup. 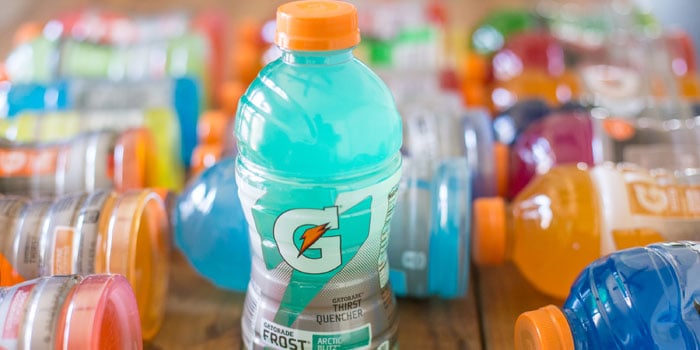 Why Would You Give Gatorade to Your Dogs?

There are several reasons why you might want to give Gatorade to your dogs. To begin with, it can help when your dogs have diarrhea and are losing valuable electrolytes because they are having too many bowel movements and being drained of too many fluids. Some people think that they should give Gatorade to extremely active dogs. While a bit now and again isn’t going to cause any damage, it is not something that they should regularly be drinking.

An Alternative To Gatorade For Dogs

Too many people think that this is the best thing to give dogs for dehydration, and they are giving their dogs far too much of the sweet drink. The problem is that Gatorade is usually high in sugar, which is not good for dogs, so you can only give it to them in small amounts.

However, there are alternatives to Gatorade. The first thing you should give to your dog if they are dehydrated is water. In fact, if your dog spends a lot of time outside, you may even want to invest in a doggy water fountain so they can drink whenever they need to.

There are other problems with Gatorade as well that make it not the best choice to give to dogs, especially on a regular basis. For instance, in addition to being high in sugar, it also contains many additives that aren’t necessarily great for dogs. It is high in sodium, which is also not healthy for dogs.

In cases where water just isn’t enough and electrolytes need to be replaced, a better option than Gatorade is Pedialyte, a formula that is meant for human babies. This is a lot safer than Gatorade, even though it does tend to be a bit costlier. But, your four-legged babies are worth it. Pedialyte was created specifically for rehydration, so even though it is not made for dogs, it is good for them to have when they are dehydrated.

No, Your Dog Should Not Drink Gatorade

The best thing for dogs to drink if they are dehydrated is, and always has been, water. Make sure that your dogs have constant access to their water supply. If you are out with them, bring water with you, or take them to places where water is available. The last thing you want on your hands are dehydrated doggies, but Gatorade is not always the best answer.