Dogs and bacon seem like a good thing. When you sit down to enjoy a plate of bacon and eggs for breakfast, do your dogs look at you with those sad eyes begging for some leftovers? You are probably very tempted to give them some. If you are wondering whether dogs can eat bacon, the short answer is a definite no. Even though a little bit once in a while may not hurt them, bacon is unhealthy for dogs and we highly discourage it, especially raw bacon and grease. Here’s why bacon is bad for dogs! 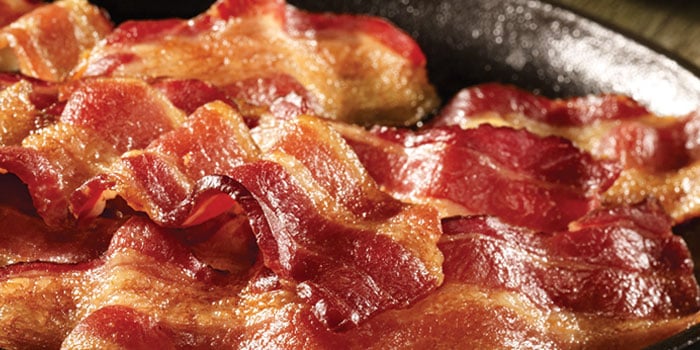 Bacon and Grease Are Unhealthy For Dogs

Cured meats really aren’t all that healthy for anyone, and that includes dogs. Bacon is a preserved pork product. It is preserved through curing, salting, or smoking. It is fine for humans to eat it in moderation, but it can be really unhealthy for dogs, particularly when raw. This warning also extends to bacon grease, which is very bad for dogs.

There are plenty of other human foods that are a lot safer for dogs to eat, including many meats, so give them a different treat that is healthier and not loaded with salt.

Why Is Bacon Unhealthy For Dogs?

There are several reasons why it is never a good idea to feed your dog bacon. Whether it is cooked or raw, it can cause several health problems, including pancreatitis, which usually requires surgery and can be fatal in dogs. Other health issues dogs can get due to eating bacon include:

We really can’t stress enough how important it is to make sure that you never give your dog any bacon, or any bacon by-products, including bacon grease. The grease contains all of the things that make bacon unhealthy, and on top of that, it is pure grease, which isn’t healthy for anyone to consume. Some people think that it is okay to mix a bit of grease into dog food, but it is best to avoid giving them bacon in any way, shape, or form.

No, Dogs Can’t Have Bacon

Your dogs are a part of your family, and you want to make sure that they are healthy and happy for many years to come. This means that you need to feed them a healthy diet, and that diet should not include bacon whatsoever. Sure, it tastes great, and they probably really think that they want it when you are having it, but you need to stand strong and not give into those adorable puppy dog eyes, for their sake.