Bell peppers are packed with antioxidants with at least twice as much vitamin C by weight as citrus fruits. Luckily, dogs can eat bell peppers including green peppers, red peppers, yellow peppers, and orange peppers. In fact, all bell peppers are actually green at first and their color depends on how ripe they are. The ripening process doesn’t only change their color. The number of nutrients the peppers contain also differs as they ripen.

Bell peppers are originally from Mexico, South America, and Central America. They were named by Christopher Columbus and other Spanish explorers who were looking for peppercorn plants. Once these fruits were taken to Europe, they became very popular and were eventually introduced in Africa and Asia. Cooked or raw, bell peppers are safe and non-toxic for dogs to eat in moderation. Before giving your dogs bell peppers, you should remove any seeds or stems.

To learn more, we’ve compiled a guide on bell peppers for dogs. From health benefits to the different types of peppers, explore below to see why bell peppers are good for dogs. 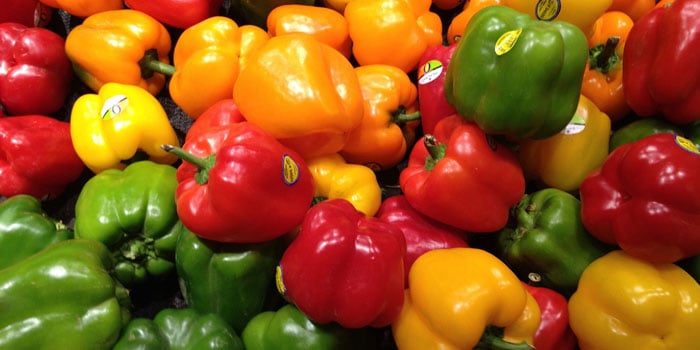 Are Bell Peppers Good For Dogs?

Bell peppers are a type of sweet pepper. They are not only delicious and crunchy additives to salads, stir-fries, and pizza but are good for dogs to eat. This makes bell peppers a fantastic snack for dogs because they tend to love their crunchy texture. In addition, cooking bell peppers, whether they are green, red, yellow, or orange, actually makes them sweeter and easier to digest. Dogs will love the sweet flavor of cooked peppers. However, you should not add seasonings while cooking since many are bad for dogs. Common ingredients like garlic, onions, or salt are terrible for them.

Although bell peppers are healthy for dogs, too much of this fruit can lead to an upset stomach. If you are giving your dogs bell peppers for the first time, start with a few nibbles and then monitor them to see if there are any side effects. Some symptoms may include diarrhea or vomiting. If your dogs don’t exhibit negative reactions, you should consider adding bell peppers to their diets on a regular basis. A whole-food diet is great for dogs and bell peppers offer a ton of essential nutrients. The best way to serve bell peppers to your dogs is either pureed or lightly cooked since this makes them easier to digest.

Bell peppers are low in calories and rich in antioxidants. They are a great source for vitamins A, C, E, K, and several B-complex vitamins. Bell peppers also contain minerals that dogs need to remain healthy and strong including phosphorus, magnesium, and manganese. A 100g serving of raw, uncooked red bell peppers contains 31 calories, 0.3g total fat, 1g protein, 2g fiber, and 6g carbs. Pound for pound, bell peppers are an excellent source of fiber, which comprises about 2% of their raw weight.

All these varieties are ripened versions of green bell peppers. However, remember that bell peppers differ from other peppers. They are the only members of the genus Capsicum that don’t have capsaicin, which is the chemical that creates a burning sensation when it comes in contact with mucous membranes. This feature makes them more of a sweet pepper than one that is spicy. Dogs can eat all varieties of bell peppers but they get the most nutrients from ripened varieties. Dogs should not eat spicy peppers like jalapenos since their digestive systems aren’t built to handle the heat.

All bell peppers are loaded with essential nutrients. The varieties with a brighter color are a result of carotenoids concentrating in their flesh. These carotenoids provide many benefits including strengthened immune systems, reduced risk of certain cancers, and defense against sun damage. From least to most ripe, the order is green, yellow, orange, and finally red.

The riper the pepper, the higher its vitamin C content. Red peppers have double the vitamin C content of green peppers. This means that pound for pound they have quadruple the amount of vitamin C as citrus fruits! Ripened peppers also taste a lot better because they sweeten over time. A few other differences in carotenoid antioxidants between the varieties include:

These carotenoids are all beneficial for eye health but their presence depends on the ripeness of the bell peppers.

How Much Bell Pepper Can Dogs Eat?

First, figure out whether your dogs like bell peppers. Whether raw or cooked, most dogs do but that doesn’t mean all dogs will like them. Give your dogs a few bites to try and also monitor them for any digestive issues that may emerge.

If they like the peppers and aren’t experiencing any issues, you can give them a little bit once in a while. No more than a quarter of a cup is recommended about once a week. You can give them a couple of small pieces as a reward during training.

As long as they are given in moderation, bell peppers make a great treat for dogs. In fact, most tend to love them. Remember, the riper the peppers, the more nutrients they contain. Bell peppers are an ideal addition to a whole-food diet for dogs, so feel free to pass a little on to your pup if you are eating some. For additional suggestions, see our page on other fruits and vegetables that dogs can and can’t eat.