Generally speaking, if a human food is bad for you, it’s probably bad for your dog as well. And although french fries are delicious, fried foods aren’t healthy for us to eat. However, some dog owners still insist on giving their dogs french fries as a treat. Oftentimes, dog enthusiasts wonder whether dogs can eat french fries or other fried potato foods such as tater tots. If these foods are unhealthy for us, are french fries bad for dogs?

Considering the very small amount of nutritional benefits from potato fries and their high levels of fat and sodium, it is almost never a good idea to give your dog french fries. In addition, the high level of fat and sodium can lead to serious health issues. Here’s why dogs should not have fries. 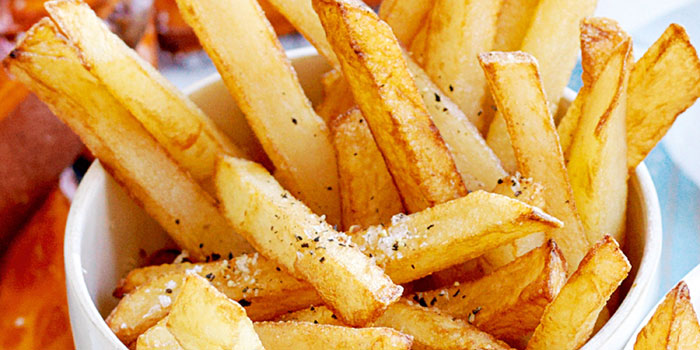 One of the main reasons why french fries are so unhealthy for dogs is that they are deep fried in oil. Potatoes, by themselves, are not high in trans fats but the oil that they are cooked in may contain trace or even high levels. In addition, eating fries can lead to obesity in both humans and dogs. The fries in your freezer are no different as they are blanched in oil before being flash frozen and stocked in grocery stores nationwide.

Salt Is Unhealthy For Dogs

Unless you cook your own fries at home, chances are high that they are loaded with salt. Salt is unhealthy for dogs and dogs oftentimes have very low tolerances to this seasoning. In fact, too much salt in a dog’s diet can lead to salt poisoning which is a very serious condition.

If you think your dog has ingested salt and is showing signs of salt poisoning, you should contact your vet for immediate treatment which may involve hospitalization, IV fluids, and electrolytes. In addition, your vet will likely take blood samples and release your dog once his or her blood tests are normal.

Even though your dogs shouldn’t eat french fries, especially those that are extremely greasy, they can eat potatoes. The salt and grease from fries are primarily what make them unhealthy for dogs and humans. A healthier alternative to french fries while still fulfilling that craving for carbs is to slice potatoes and bake them in the oven without any seasonings.

No, Dogs Should Not Have French Fries

You can give your dog potatoes as a regular part of their diets but you shouldn’t give them french fries (no matter how much they beg!). Alternatively, you can prepare the healthier recipe above for both you and your dogs!