Do your dogs love fried foods like chicken, French fries, fish, and other unhealthy fried foods? Chances are, they do. After all, fried foods are some of the most delicious treats, but fried chicken isn’t necessarily good for us, or for our dogs. In fact, fried foods are a lot worse for dogs than they are for humans.

You might think that it is okay, because you are giving them proteins like chicken and fish. But, the way it is cooked plays a huge role, and when foods are fried, they tend to lose most of their nutritional value. While dogs can eat fried foods without getting sick, there are many reasons why you should not give your dog fried chicken and food. Here’s why fried food is bad for dogs. 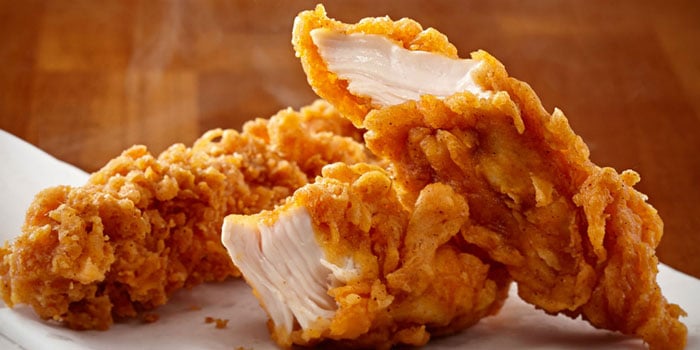 One of the biggest problems with oily foods of any kind is that they are loaded in saturated fat, which is not good for dogs. Many people think that fried fish is okay, but it ends up becoming quite oily, especially if you are frying it in butter or margarine. The best way to cook fish for dogs is to boil, bake, or broil it with no additional seasonings or butter.

Too much fat in your dogs’ diets can lead to a number of serious health problems. For starters, it can cause obesity. This in turn leads to a whole host of other issues, including respiratory problems, heart problems, diabetes, and pancreatitis.

No Fried Chicken For Dogs!

Another no-no for dogs is fried chicken. Yes, it is pretty tasty, and dogs do love it, but it is definitely not good for them, not only because it is high in fat, but also because of the seasonings that are in the coating, including a lot of salt, which can also cause health problems.

Don’t give your dog the chicken skin either. The skin is actually one of the greasiest and fattiest parts, and it can cause digestive issues. The skin is bad enough for dogs, but when you add to it the fact that they are fried, it makes them even more unhealthy, if not downright dangerous.

Now, you may think that the bones are okay, because all of the fat is gone. The bones are actually dangerous too. Unlike beef bones that are strong, chicken bones can easily break apart into small pieces. These small pieces of bone can get stuck in a dog’s windpipe or throat, and pose a serious choking hazard. To be on the safe side, it is best to avoid giving your dogs anything to do with fried chicken.

Even if you are simply frying something in the pan and not using a lot of oil, it is best not to give any of the food to your dogs. They do not need all of the fat and calories that are in fried foods, and many of these treats can actually be quite dangerous for dogs.

If you are going to be eating fried foods, make sure that you have a treat ready for your dogs that is healthier and safer, so they aren’t going to feel left out when you don’t give them any of what you are eating.