Do your dogs look longingly at you every time you open a bag of potato chips? Do you give your dog some because you think it isn’t going to hurt them? While dogs can eat chips or crisps, there are certain rules and conditions to follow before they become bad for pets to have. Remember, potato chips are salty snacks, and dogs don’t need any extra sodium in their diets. They get exactly what they need from their regular dog food.

Small amounts of chips such as Doritos and Cheetos aren’t bad for dogs, but they aren’t good treats that should be given on a regular basis. Learn why salted potato chips and crisps are bad for dogs and the potential side effects of feeding your pup this unhealthy junk food. 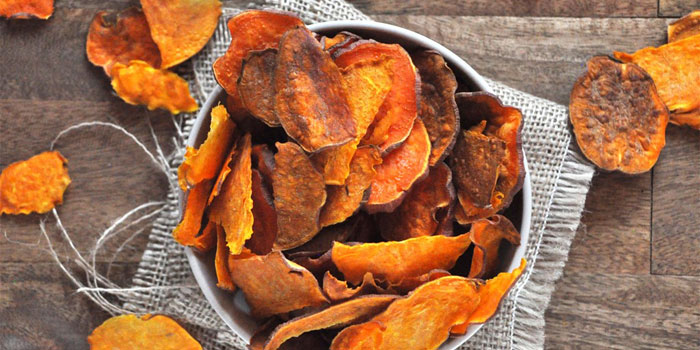 Potato Chips Have No Health Benefits

Even though chips are made from potatoes, they offer very little health benefits for both humans and dogs. Potato chips are basically empty calories, which none of us really need. Chips are a processed food and processed foods are rarely, if ever, good for dogs. Any nutritional benefits that the potatoes may have had are long gone once they have been processed into chips. Even “baked” chips are processed, and not as healthy as the manufacturers would like us to believe.

You should not give dogs potato chips because there are a lot of risks without any benefits. For starters, chips are cooked in oil so they are loaded with unhealthy trans fats. They don’t really contain any vitamins or minerals to speak of, even though some manufacturers claim that their sweet potato chips do contain vitamin A. There are other snacks that are higher in vitamin A that are much healthier, such as real sweet potatoes and carrots.

In addition to having very little nutritional benefits, chips are also loaded with ingredients that are not good for dogs. We already mentioned above about chips being cooked in oil, which is not good for dogs. Chips are also high in sodium and carbohydrates. Not only can these make your dog sick, they can also increase your dog’s chances of developing obesity which, in turn, leads to many other health problems. These problems may include heart issues, diabetes, and pancreatitis, all of which can be deadly.

What If My Dogs Eat Some Chips?

It is okay to give a couple of potato chips to your dog now and again. The problems start to occur when they have eaten too many chips. Too many chips can lead to salt poisoning, also referred to as hypernatremia. Symptoms can include the following:

When you are munching on potato chips, set aside some healthier snacks to give to your dogs. After all, they don’t want to be left out, and when you are having a treat, they want one as well. Give them carrots, watermelon, bananas, cantaloupe, apples, and other snacks that are crunchy, delicious, and healthier for dogs than potato chips that are loaded with trans fats and salt.