If you love to give them treats, you need to make sure that those snacks are healthy for your dogs. Dogs should not eat sausages because they are high in fat and salt, and often contain seasonings like garlic or onions that are toxic for them. Generally, meat is healthy for dogs since it includes protein, vitamins, and minerals that are essential for dogs to maintain active lifestyles.

While sausages may sound like a meaty and delicious treat, most experts say that sausage is bad for dogs to eat. Unfortunately, dogs can’t eat any types of sausages including Vienna, Italian, chorizo, turkey, pork, chicken, breakfast, kielbasa, bratwurst, summer, and hot dogs. You should also avoid giving dogs raw sausages since it enhances their risk of getting infected by parasites.

To help you learn more, we’ve compiled this guide on sausages for dogs. From Vienna to patties, explore whether your dog should have sausage for breakfast, lunch or dinner. 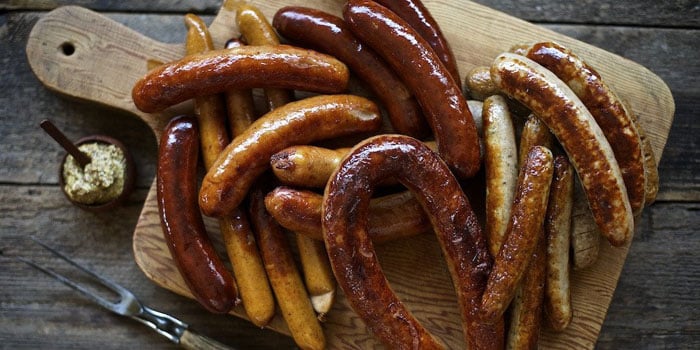 Is Sausage Bad For Dogs?

Do you enjoy having breakfast sausages in the morning? Do your dogs look at you with those sad, pleading eyes, hoping you will toss a little bit their way? Sure, they probably love sausages but it is never a good idea to give them their own piece. You can safely give them a small bite or two but that is more than enough.

One of the main reasons sausage is bad for dogs is because it is so high in fat. Did you know that a breakfast sausage can be as much as 50 percent fat? This is not healthy for dogs and can increase their risk of developing obesity, heart problems, pancreatitis, and diabetes.

Sausage is also loaded with salt and other seasonings that are not good for dogs. These seasonings can include onion and garlic, which are both very bad for dogs and can cause red blood cell damage. The typical sausage link contains 315 calories, 29g total fat, 10g saturated fat, 69mg cholesterol, and 665mg sodium!

Always give your dogs fully-cooked sausage because raw sausage can contain salmonella, a bacteria that can lead to food poisoning in both dogs and humans. Raw sausage also increases their risks of developing parasites since pork can contain Trichinella Spiralis, a parasitic roundworm that can cause lethargy, stiffness, abdominal pain, vomiting, diarrhea, and inflammation.

Can Dogs Eat Any Type of Sausages?

Unfortunately, there aren’t really any types of sausages that are good for dogs except those made specifically for them. They are high in fat, sodium, and often include seasonings that are bad for dogs. See below for several examples:

Vienna sausages are parboiled sausages from Germany that are made of pork and beef and encased in sheep’s intestine. They are a type of processed meat and are typically sold in cans. A single 4.6 ounce can has 340 calories with over 75% of those calories coming from fat. In addition, Vienna sausages are high in saturated fat, cholesterol, and sodium. They also contain preservatives and garlic powder, which are not good for dogs.

Italian sausages are typically made from pork and exhibit strong flavors of anise or fennel. Other seasonings include salt, black pepper, chili pepper, basil, and parsley. Italian sausages are not good for dogs to eat because they contain a lot of salt, fat, and calories. A single link contains 258 calories, 20g total fat, 7.6g saturated fat, 43mg cholesterol, and 557mg sodium.

Chorizo is a highly seasoned pork sausage found in Mexican and Spanish cuisine. Although they share similarities, chorizo from Mexico differs from those found in Spain. Mexican chorizo is made from raw pork and needs to be cooked. It is typically seasoned with chili pepper and vinegar. Spanish chorizo is smoked and is usually seasoned with garlic and paprika. Dogs should not eat chorizo because it is high in calories, fat, and sodium. In addition, the Spanish version contains garlic, which is toxic for dogs.

Turkey sausages are typically leaner than other alternatives. A single turkey sausage link contains 147 calories, 7.8g total fat, 1.7g saturated fat, 69mg cholesterol, and 499mg sodium. Although they are comparatively lower in calories and fat, turkey sausages are not good for dogs to eat. In addition, they are high in salt and commonly contain nutmeg, garlic, and onions as seasonings, which are terrible for dogs.

Pork sausages are made by mixing ground pork meat with salt, fat, seasonings, preservatives, and fillers. Common seasonings include fennel seeds, black pepper, nutmeg, parsley, and garlic. A single pork sausage link contains 300 calories with over 75% coming from fat. It also has 26g total fat, 8.2g saturated fat, 80mg cholesterol, and 748mg sodium. Besides the high levels of sodium, fat, and calories, dogs should not eat pork sausages because they also contain nitrates. When consumed, these nitrates form N-nitroso compounds in the body, which are known to cause cancer in both animals and humans.

Chicken sausages are likely the healthiest option for dogs to eat because they are much leaner. A single chicken sausage link contains 147 calories, 7.8g total fat, 1.7g saturated fat, 69mg cholesterol, and 499mg sodium. However, you need to be careful with the ingredients because they can contain garlic or onions. Although we recommend removing all sausages from your dogs’ diets, choose chicken (without any harmful seasonings) if you plan on giving some to your dogs anyways.

Breakfast sausages are eaten in the U.S. as small sausages and usually accompany eggs, pancakes, and hash browns. They are heavily seasoned and are often eaten with maple syrup. A single serving of breakfast sausages (the links are smaller so not comparable to a single link of other sausages) contains 170 calories, 15g total fat, 5g saturated fat, 40mg cholesterol, and 430mg sodium. Common ingredients include ground pork, bacon, maple syrup, sage, thyme, fennel seeds, red pepper flakes, nutmeg, salt, and black pepper. Dogs should not eat breakfast sausages because it can be comprised of up to 50% fat and includes a lot of salt, nutmeg, and bacon.

Kielbasa refers to any type of sausage from Poland and is actually the Polish word for sausage. They are made primarily from pork or a mixture of pork and beef. Kielbasa possesses a distinctive garlic taste along with pimentos, marjoram, and cloves. Kielbasa is often smoked, which gives it even more flavor. An equivalent serving of kielbasa has 226 calories, 18g total fat, 6g saturated fat, 70mg cholesterol, and 1,200mg sodium. Given its extremely high levels of sodium and garlic, dogs should not eat kielbasa.

Bratwursts are from Germany and are typically made from pork, veal, or beef. They are commonly seasoned with nutmeg, salt, lemon peel, caraway, garlic, ginger, marjoram, and white pepper. An equivalent serving size of bratwursts contains 297 calories, 26g total fat, 6g saturated fat, 78mg cholesterol, and 848mg sodium. Dogs should not eat bratwurst sausages because they contain a high level of fat, salt, garlic, and nutmeg.

Summer sausages refer to any type of sausages that don’t need to be refrigerated until opening. They are usually a mix of pork, beef, or venison. Summer sausages are often dried or smoked and usually use curing salt to help preserve them. An equivalent serving size of summer sausages contains 426 calories, 38g total fat, 10g saturated fat, 89mg cholesterol, and 1,483mg sodium. Common seasonings include black pepper, garlic salt, and mustard seeds. These are one of the worst sausages for dogs since it has extremely high levels of calories, fat, and sodium.

Don’t give your dogs those Vienna sausages you just cooked up. Instead, there are healthier options that dogs love that won’t cause obesity or other heart problems when given in moderation. For example, there are sausage-like doggy treats that are made specifically for dogs, so they are high in the essential nutrients dogs need without containing a lot of fat and seasonings that may be harmful to dogs.

Alternatively, you can prepare fresh meat for your dogs. Lean beef or pork is healthy for dogs in moderation or they can also eat seafood options like salmon or shrimp. As a general rule, you should never season your dogs’ food since many seasonings are not good for them.

The occasional small piece of sausage from your plate will not harm most dogs. However, you should not give sausage as a part of their daily diet (no matter how much they beg for it). Instead, opt for healthier treats that are just as tasty and a lot better for your dogs. If you do give them a bit of sausage now and again, watch them to make sure that they are not suffering from possible side effects including gas, bloating, diarrhea, or constipation.